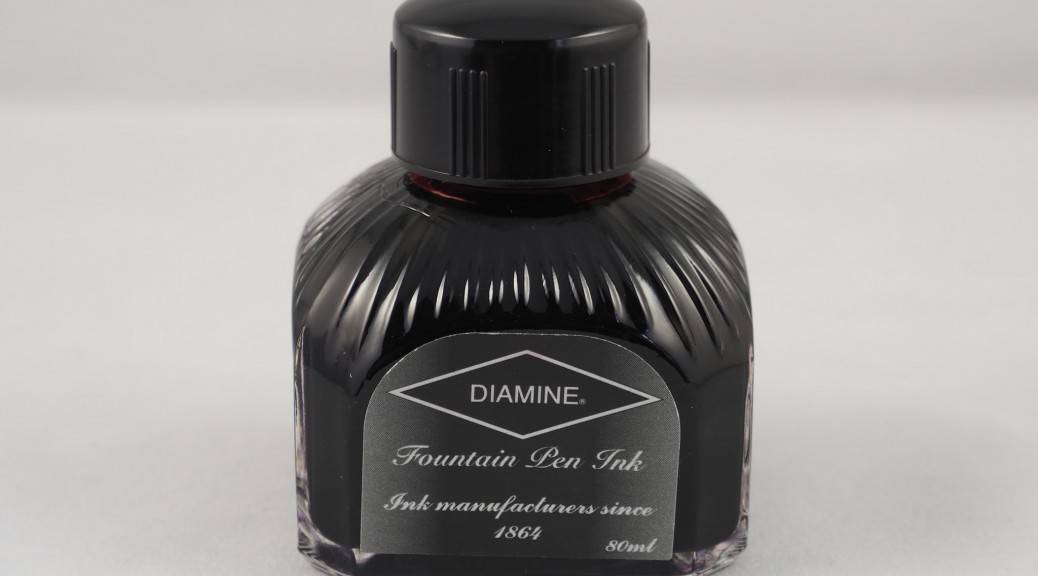 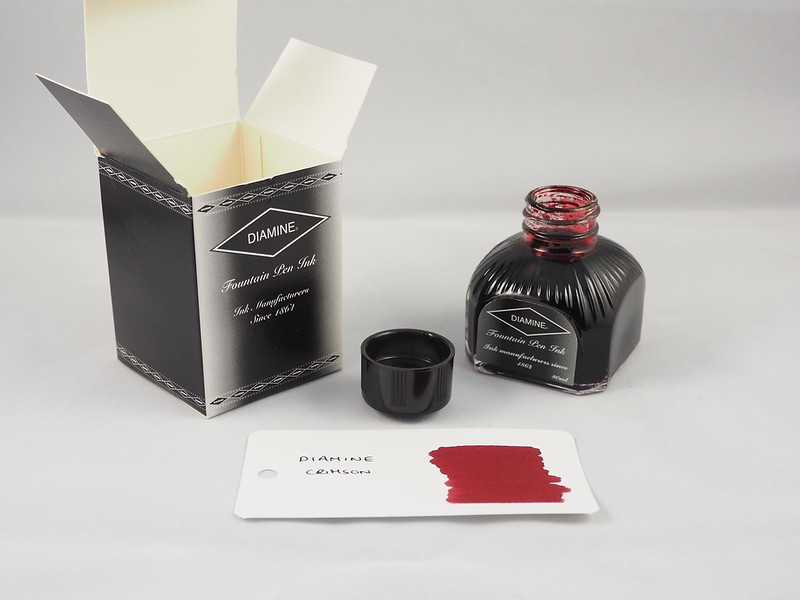 This is the last in this batch of three ink reviews, for one of my favourite red inks, Diamine Crimson.

No nonsense here from Diamine – the name is just “Crimson”, which according to Wikipedia is:

“a strong, red color, inclining to purple. It originally meant the color of the kermes dye produced from a scale insect, Kermes vermilio, but the name is now sometimes also used as a generic term for slightly bluish-red colors that are between red and rose”.

Crimson is also defined as an HTML colour corresponding to #DC143C, which looks like this:

While this is fairly close to the colour of the ink it looks a little lighter to me, but a lot will depend on the device this page is being viewed on.

The ink came from a UK supplier and is currently available for around £6.00 for a 80ml bottle, which I would consider very reasonably priced.

This is the first time I have had to describe the conventional Diamine box and bottle, as opposed to the “Anniversary” boxes. Where to start? The box is almost cubical, a combination of grey and black with white text giving the absolute minimum information. Even the name of the ink has been added with a small sticker on the top of the box. Although I couldn’t find a picture of a “vintage” Diamine box (or bottle) I wouldn’t be surprised if they haven’t changed much since 1864. On to the bottle, which follows the retro style, with flat sides fluted up to the neck. Even the cap (which also bears a little sticker with the name of the ink) looks like it’s been made out of something like Bakelite (I’m sure it hasn’t though). The label on the front matches the grey, black and white style of the box. The only concession to ornament is the fluting on the bottle, giving an even more spartan appearance than Noodler’s version, which at least custom labels (often quite elaborate). As somebody who was born in the industrial Midlands, it’s easy for me to conjure up a mental image of the kind of factory where such a design would originate, and looking on the old factory on the Diamine website I wasn’t far off. Considering the number of times I’ve criticised more ostentatious packaging it would be churlish of me to wish there was something a little more interesting about the boxes and bottles, even just to give me something to refer to in future reviews, so I’ll keep those thoughts to myself! The one practical criticism that I do have is that I find the neck of the bottle quite narrow. I’ve not emptied a Diamine bottle yet, bit I can imagine it will be tricky getting the last of the ink out, at least using a fountain pen. Well, that’s it – what will probably be my one and only attempt at describing the standard Diamine bottle and box. I’m amazed I managed to write as much as I did.

The test pen on this occasion was the Pilot MR White Tiger with a medium nib – I really like using this pen with red inks.

Water resistance was almost non-existent, running water left very faint lines and water droplets obliterated any lines. Cleaning was easy enough but in common with a lot of red inks it can be tricky getting the last of the ink out of the feed. Drying time was fairly quick at around 30 seconds. 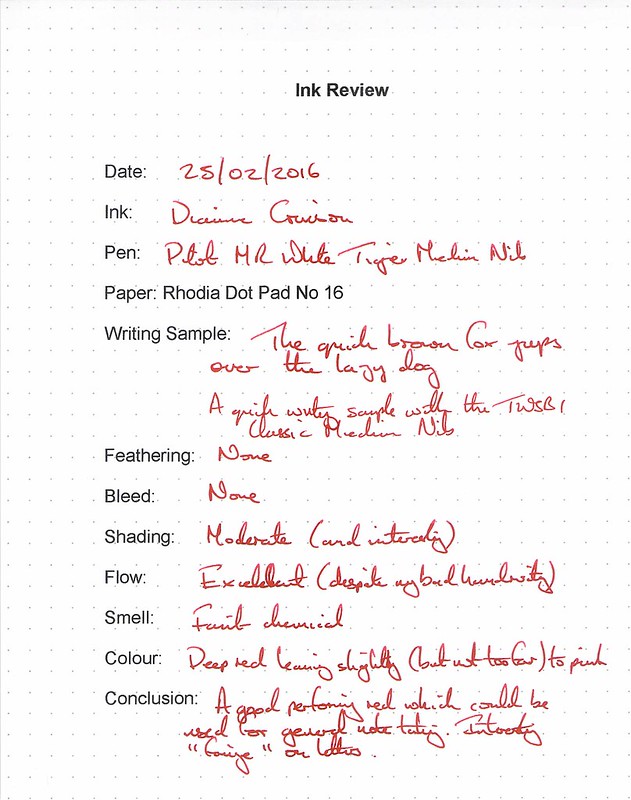 This is overall a very good performing ink, but the feature I really need to mention here (and which doesn’t really show in the usual scans) is that the ink shades in an interesting way, with a “fringe” on the edge of most letters which I think adds to the way the ink appears to pop off the page. This is most evident on Rhodia paper. Here is a magnified example, even here the scan doesn’t really do it justice, neither does my atrocious penmanship, but it is visible. 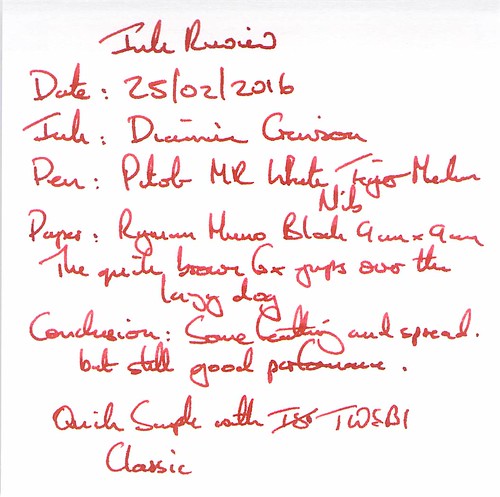 Again good performance and again the scan really doesn’t do it justice, 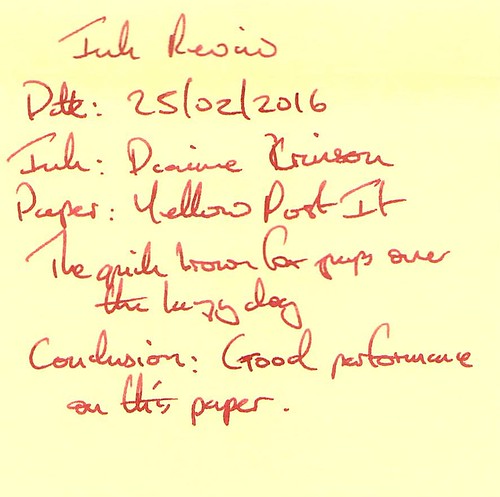 Another good result, this time taking on a brownish tinge. 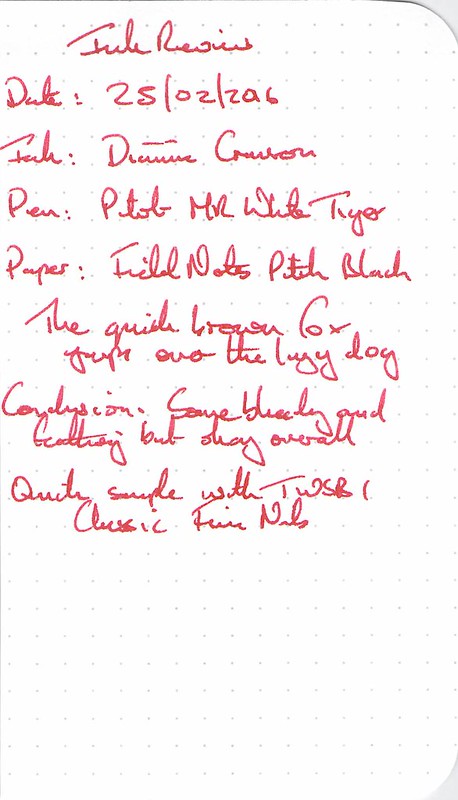 One of the better results on this paper, not even much dilution of the colour. 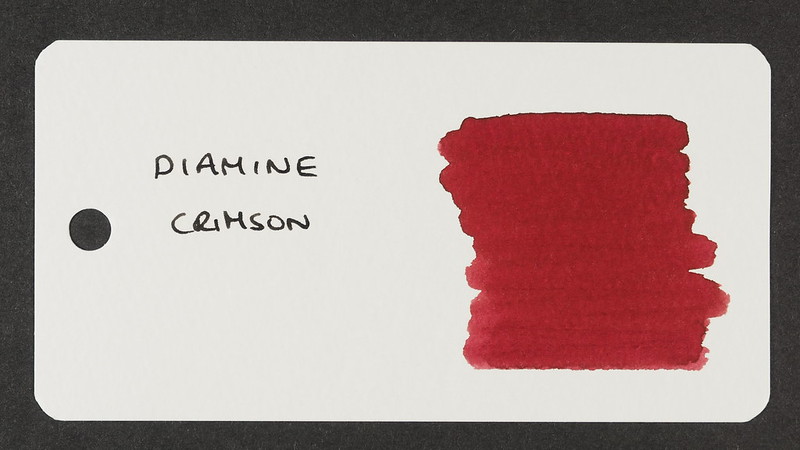 This shows the range of shading, and the fringe around the swab, especially on the top edge.

The colour of this ink means that it’s suitable not just for markup but also for taking the odd note. Once again water resistance would be a bonus, but even without this is a perfectly acceptable ink, if you like the colour. 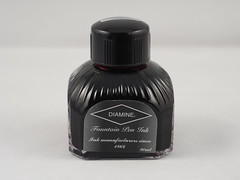 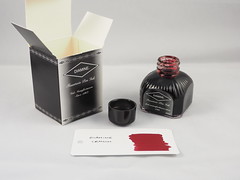