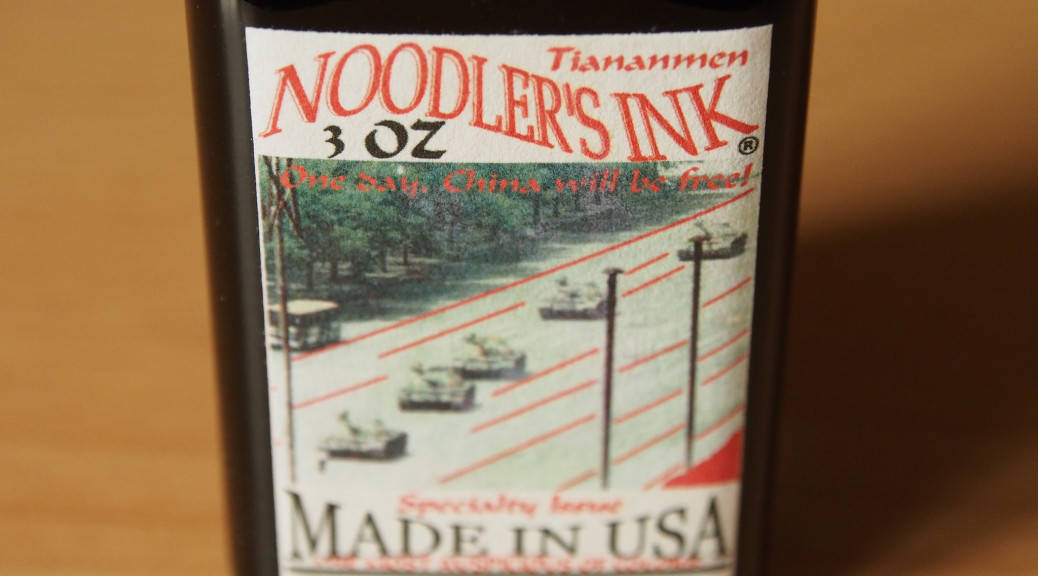 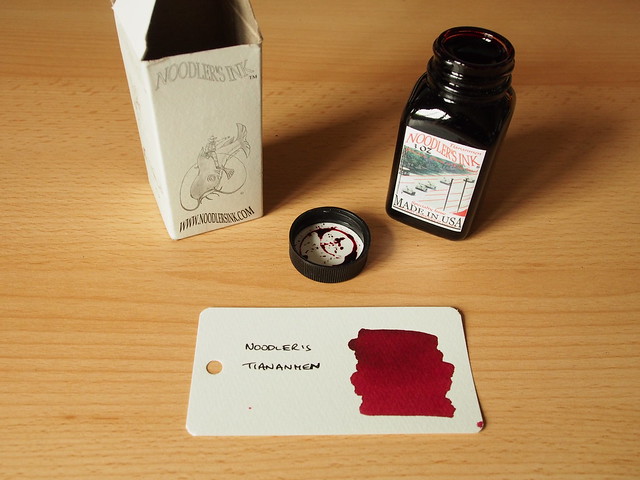 For the last in this batch of ink reviews, I have chosen Noodler’s Tiananmen, which according to the label is a “Specialty Issue”. This isn’t the only Noodler’s ink that is so described, and I’ve already reviewed a few others, but I’ve only picked up on the description now. I’ve not been able to find out what “Specialty” actually means, but the inks from this series I’ve reviewed so far (Ottoman Azure, Ottoman Rose and La Couleur Royale) have all had attractive colours and been good performers.

The Chinese consider red to be an auspicious colour, which is stated on the label for this ink. The name and label evoke the protests of 1989. While those protests led to the deaths of hundreds (or possibly thousands) the image on the label shows a symbol of hope, the so called “Tank Man” confronting a column of tanks. The label also states “One day, China will be free!” One could argue that while Western businesses continue to rely China to keep costs down and so maximise profit, that day will be a long way off but as I’m not about to start a boycott and throw away my Apple products I won’t get on my high horse just yet.

This 3 oz bottle came from my preferred Ebay supplier so I would consider the price moderate. The box and bottle are as standard. The test pen was a Pilot MR White Tiger with a medium nib.

Water resistance was minimal. Cleaning was easy enough, which was a bit of a surprise for a saturated red. The drying time was extended at more than 2 minutes, leading to easy smudging. This was less of a surprise – long drying times are something I am starting to associate with saturated inks, reds in particular. 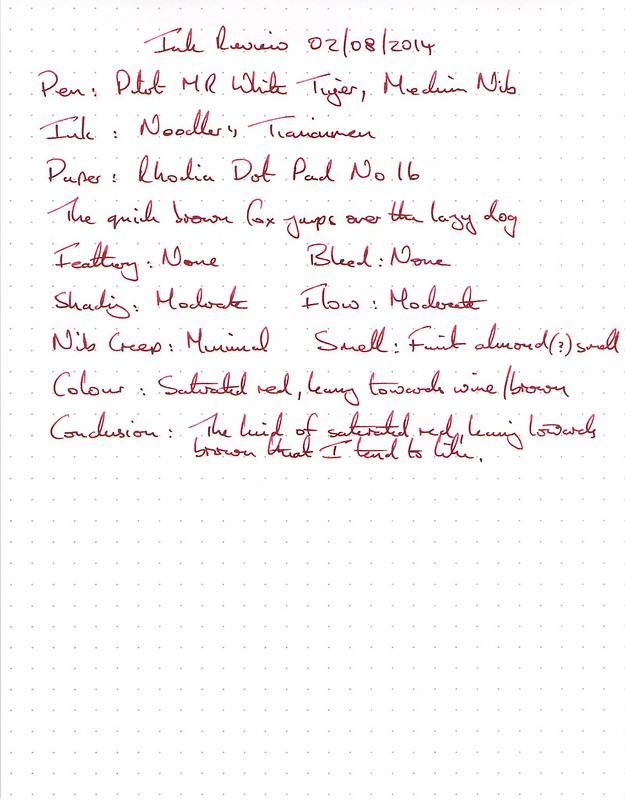 Performance on this paper was good. The only downside was the long dry time which led to easy smudging. The colour is a deeply saturated red with a slight hint of brown – I really like it. 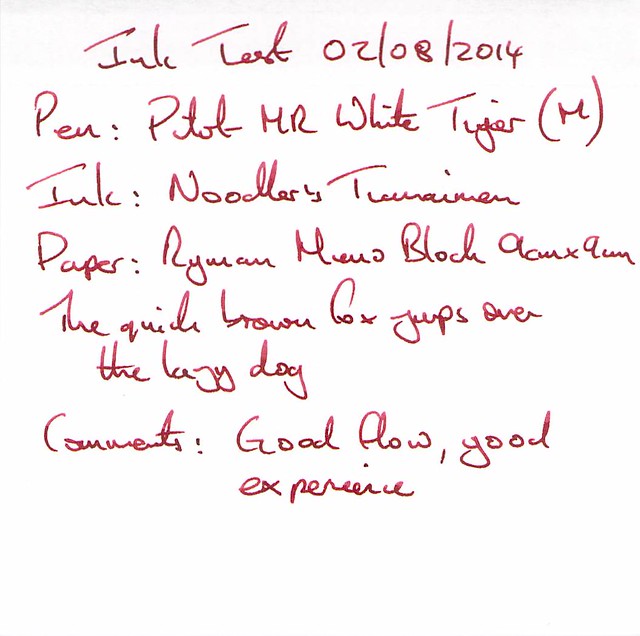 No complaints on this paper – performance was good. 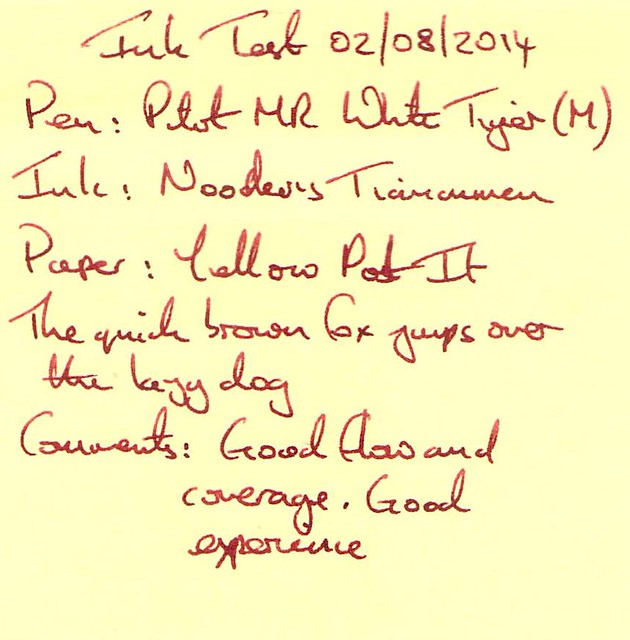 Good performance from this ink on the Post-It too. 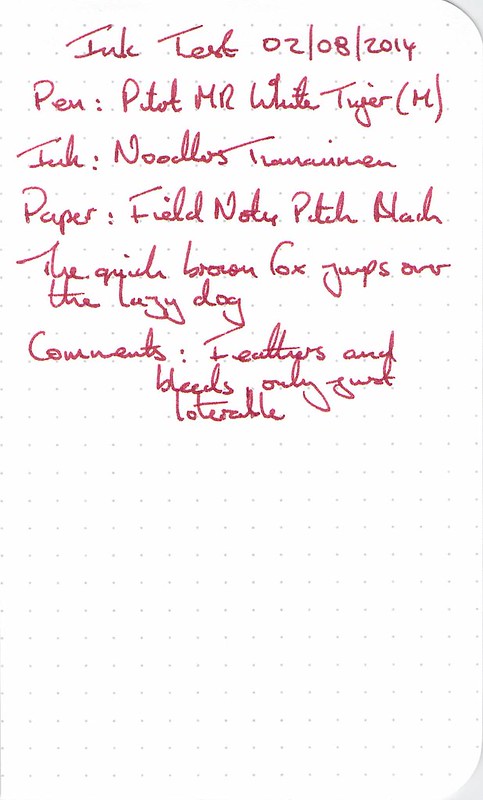 Another ink falls at the feet of Field Notes paper – lots of feathering and bleed. 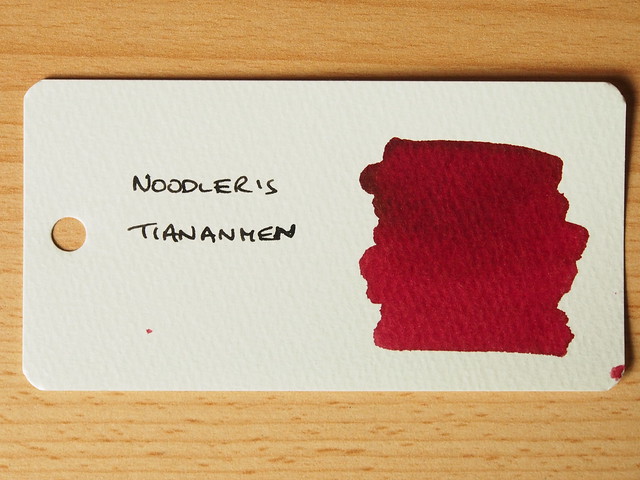 The saturation of this ink shows through, with more than a hint of shading.

Another “Specialty” ink that proves to be a good performer. The only downside is the dry time, but that is starting to become as feature of red inks that I like (and more saturated inks in general). I really like this one, and is already near the top of my list of “good” reds.