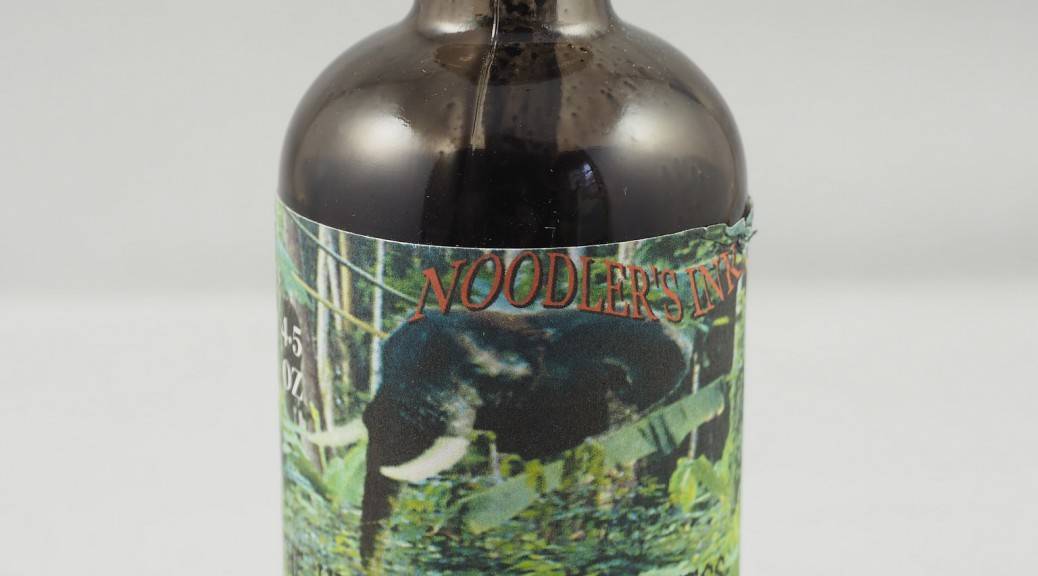 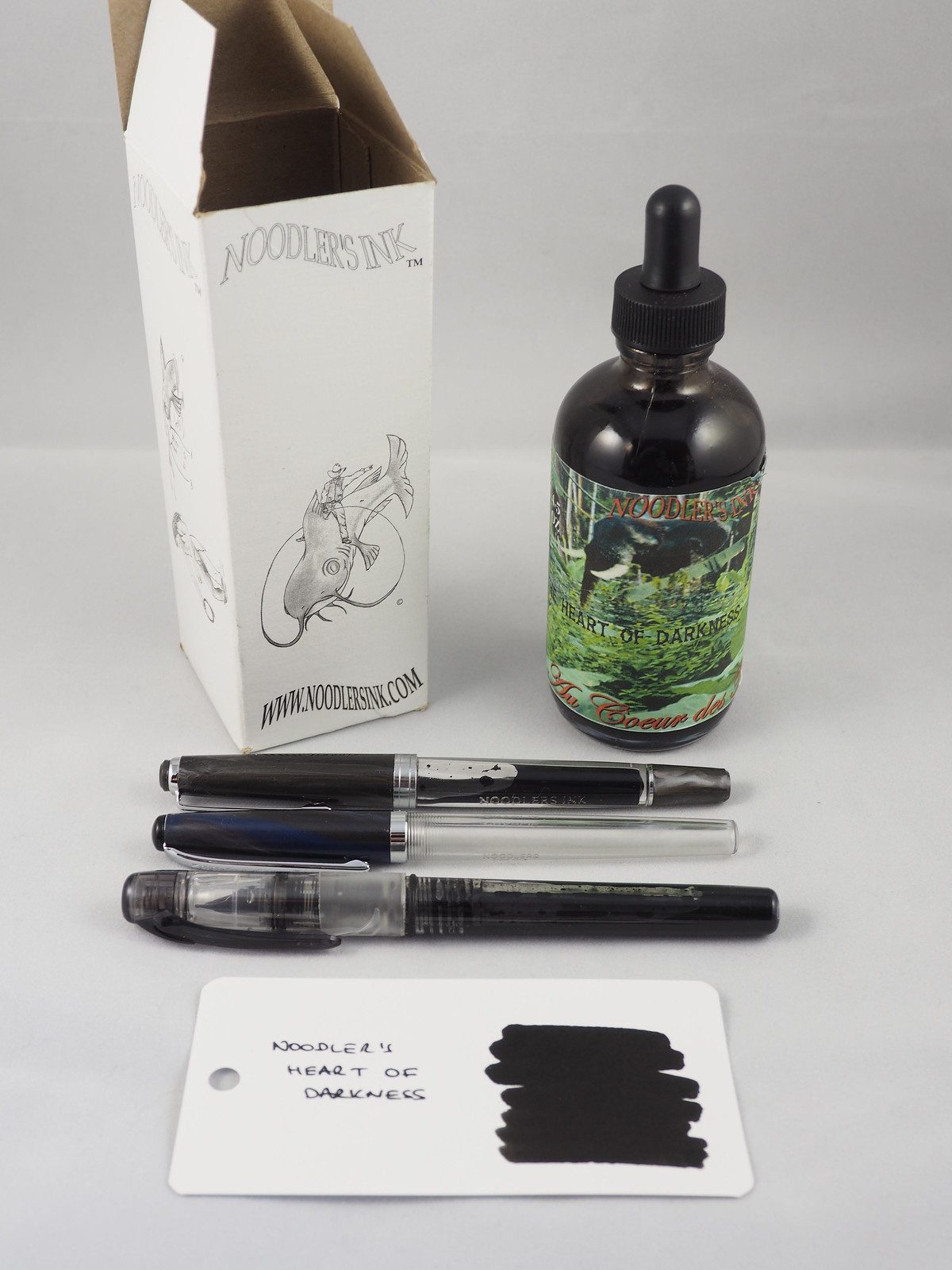 I’ve finally started the next batch of ink reviews and, spoiler alert, these are for three of my favourite inks. The first is for Noodler’s Heart of Darkness.

The ink gets its name from the novella by Joseph Conrad, which he based on his experiences of the Congo in Africa. The story in turn was adapted as the movie “Apocalypse Now”. I haven’t read the book, or watched the movie apart from a few clips on TV, I realise that the latter is such a major omission in my movie-watching CV that I’ve just ordered it from Amazon. What’s this got to do with ink? Probably nothing, but it’s a cool and approriate name.

The label shows a jungle scene, with an elephant (the ears look authentically African) and what I assume to be the lord of the demon catfishes. As I doubt that the latter has ever been caught on film instead we are treated to a lifelike drawing. The text on the label is limited to “Heart of Darkness” in English and French, “Eternal” and “4.5oz”. The latter is probably with most significant with regard to this review, as it gives me my first opportunity to review the Noodler’s 4.5oz, after having floundered when trying to say something new about the 3oz bottles in recent reviews.

Let’s get the fact that he box is a typical Noodler’s white box with black line-art, upsized for a 4.5oz bottle, out of the way quickly. So what about the bottle? It’s purely functional, which I approve of – no surprise there, but it’s a different functionality to the 3oz bottle. The 3oz bottle is fine for filling conventional fountain pens, whereas the 4.5oz bottle is pretty awful for this. The neck is narrow and the bottle is deep, not a good combination for a cartridge converter or piston filler, for example, but necessary for the eyedropper in the cap of the 4.5oz bottle. That’s where this comes into it’s own – for filling eyedropper pens. In fact, when I bought my first bottle I decanted some into an empty Diamine bottle, just to make it easier to fill more conventional pens.

I’ve bought two 4.5 oz bottles so far. The first came with an unbranded Platinum Preppy (the bottom one of the pens in the photo able) intended to be used as an eyedropper pen. The o-ring was broken, so I needed to replace it with one I had to hand, which was a more chunky one. The plastic on these pens is very brittle so the cap quickly cracked, hence the classy piece of sticky tape wrapped around it in the photo. Despite it’s limitations I really like this pen and have used it to label almost every one of the Word Cards on this site. The second bottle came with two free pens, one a free flex pen of the type which seems to have replaced the Preppy (the top one in the photo), the other a “Charlie” pen, which I will leave to Mr Tardiff to describe.

I’m not a great fan of the newer flex pens. I can’t get on with the nibs and find the sickly smell of the plastic offputting. Although the Charlie pen uses the same plastic it has a different nib and I look forward to trying it with Baystate Blue. I’ll report the results another time.

The first bottle was from my usual US Ebay supplier, the second was from Niche Pens in the UK. As Noodler’s inks are difficult to get in the UK, I took the chance when I had it to get another bottle, even though it will be along time before I need it. There’s no discount that I can see for buying a larger bottle, but the free pens make up for that. Ingnoring shipping I would consider the ink to be reasonably priced.

The test pen on this occasion was a Pilot Metropolitan Violet Leopard with a medium nib. Usually I would use the Pilot MR Black, and I did try using this pen initially for the review, but the flow was so heavy that it looked like I was using a broad nib. I can only assume that as this pen has received so much use that the tines have spread or become more flexible, whereas the Violet Leopard (being newer) seems to be more of nail-like and gave what I felt to be more representative results. It is true that this is a very free flowing ink.

Water resistance was almost total – running water made no visible difference, I assume because any ink that did move was washed away. The droplet test moved some of the ink, just giving a faint grey overlay where some of the ink moved. I hadn’t left the ink to dry very long either before running the test. 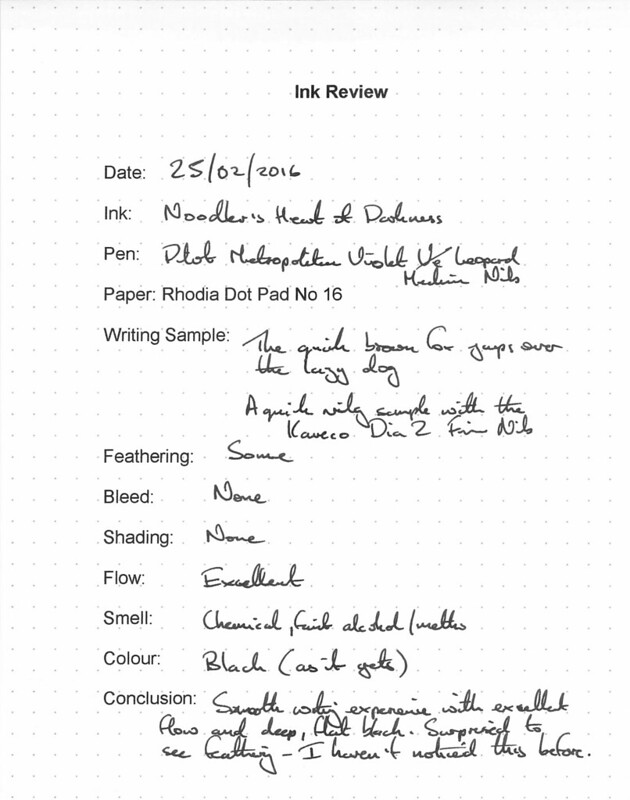 The writing experience was great on this paper, I was however really surprised to see some feathering. I even tried a few writing samples on other sheets of Rhodia Dot Pad paper with the same results, although on Rhodia lined paper no feathering was apparent. I didn’t find it pronounced and maybe wouldn’t have noticed it if I wan’t looking for it. Maybe I’m just making excuses for an ink I already like. I usually use this pen with a Kaweco Dia 2 with a fine nib, which isn’t the most free-flowing pen, so I gave this a try too – some feathering was still visible. There can be no arguing with it being black though, with the minimum of shading. 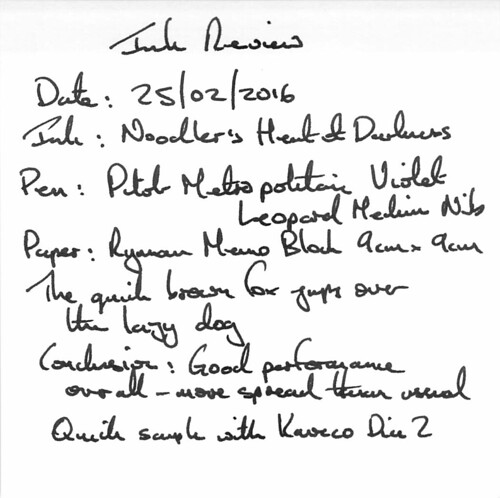 Some spread here, and still some feathering but it looks even blacker than on Rhodia, if that is possible. 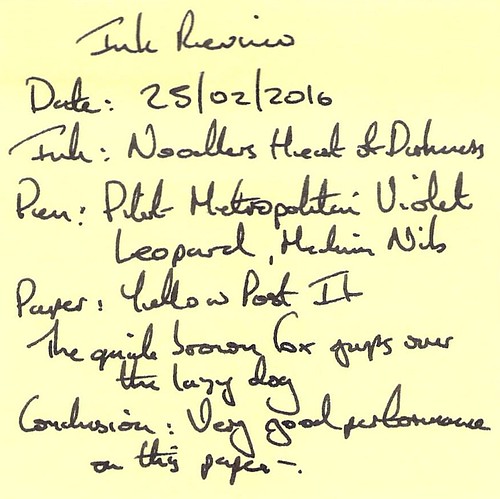 A little feathering again but the ink performed well on this paper. The black holds up too, not truning to grey. 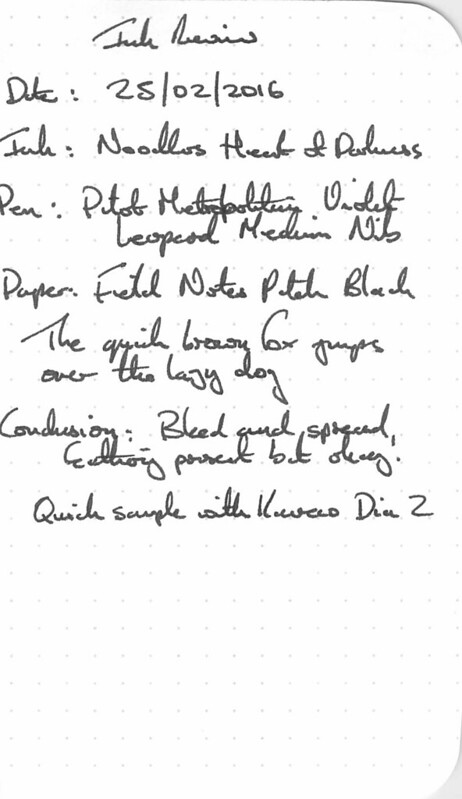 Considering the feathering on better paper, I was expecting bad results, but although there was still some feathering it was acceptable. The blackness is diluted to dark grey, not a great surprise and still just acceptable. 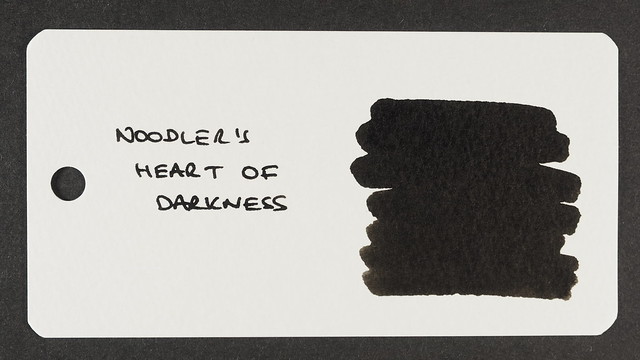 Only on the fringes of the swab is any real variation visible – on the rest of the sample it’s more the texture of the paper under the lights.

It’s always interesting to use an ink that I already liked under more rigorous conditions and to find a flaw. The feathering really was a surprise, but not one that’s going to stop me using the ink any time soon, mainly due to its other qualities. It’s still fairly quick drying and as water resitant as any other ink I’ve used so far, and above all it’s truly black with the minimum of shading – just what I want.

I’ve heard the phrase “as black as the inside of a coffin on a moonless night” used quite often, and it sums up this ink perfectly, so I tried Googling to find the origin, and got as far as the movie Beverley Hills Ninja (1997). I want this to be wrong – if anyone knows of an earlier source, please post it in the comments. 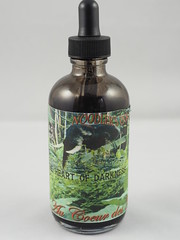 Noodler's Heart of Darkness - Close Up 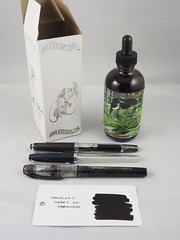