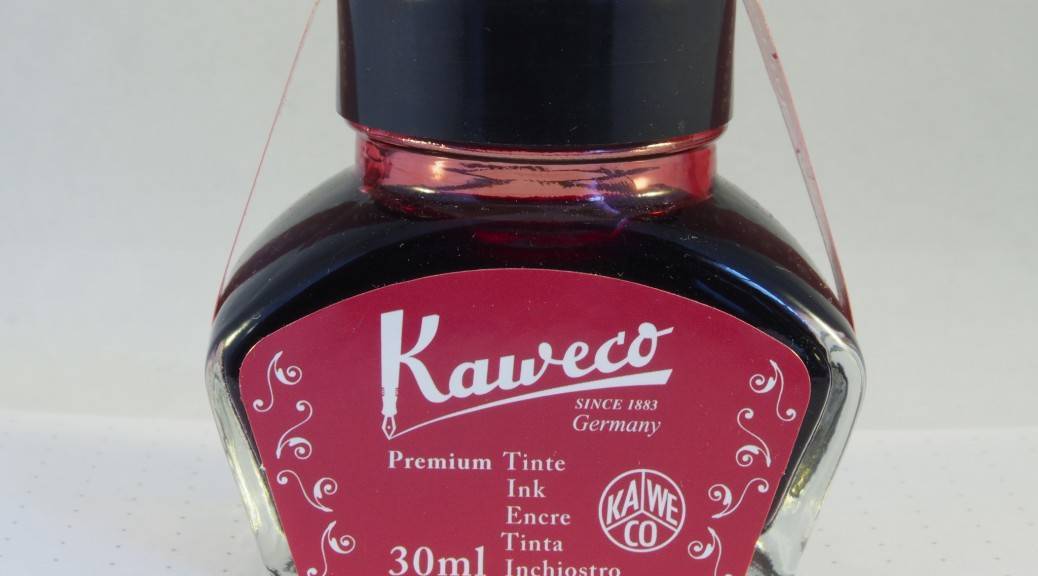 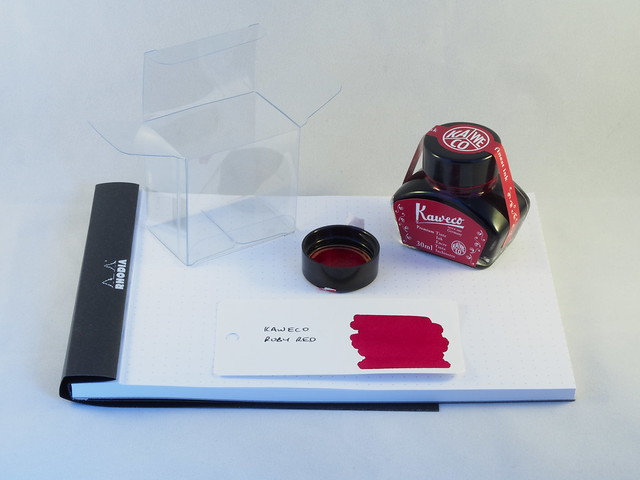 The third in this batch of reviews is for Kaweco Ruby Red ink.

This is a slightly more complicated disclaimer than usual. I received one bottle of Ruby Red free of charge by Kaweco, but I already owned a bottle which I had paid for. I was not paid to write this review, which is my honest assessment of the ink, and is not influenced by the fact it was supplied with a bottle free of charge. I hope that makes sense, but the next paragraph should clarify a little more.

I originally purchased a bottle of Kaweco Ruby Red ink around a year ago from a US supplier – at that point in time there were no suppliers I was aware of in the UK. The ink cost $16.95, and the shipping $24.95 (a total of over $40). It was a moment of madness – the only time I had paid that much for a bottle of ink before was for Pilot Iroshizuku, and that was before I knew where to get it for a better price. Although I was pleased with the colour and performance of the ink, I couldn’t justify to myself paying that much again, so I hadn’t planned to try the other Kaweco inks until they were available in the UK. The kind offer from Kaweco rendered that unnecessary, and means that I also have a nice pristine bottle of Ruby Red safely stored in its plastic box, with its seal still intact. It also explains why the picture above shows a sealed bottle with an open cap and and swab – I didn’t go to the trouble of steaming off the seal and reattaching it – the swab and cap are from the first bottle that I bought, the sealed one is the bottle supplied by Kaweco. I’ve dwelt on this too long.

All the comments that I made regarding the bottle, box and cost of the ink in my Kaweco Pearl Black Ink Review apply again here, so I shall not repeat them, except that in this case the front and top labels have white text on red (which matches the ink colour).

The test pen in this case was a Pilot MR White Tiger with a medium nib.

Water resistance under running water was almost nil, and water drops obliterated any text. Despite the lack of water resistance, cleaning was more of a challenge that expected and it took longer than usual to clear all the ink from the feed, but it didn’t require anything other than water.

The dry time was relatively quick at around 20 seconds. 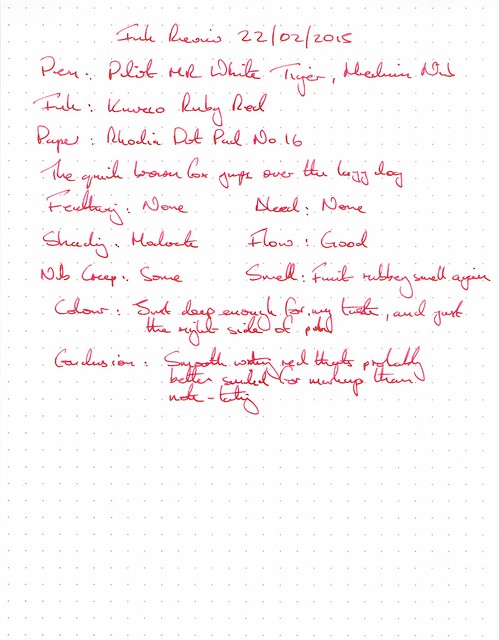 Looking carefully at the ink again it does lean sligthly towards pink, but not too far for my taste. Otherwise it’s a good performing ink. 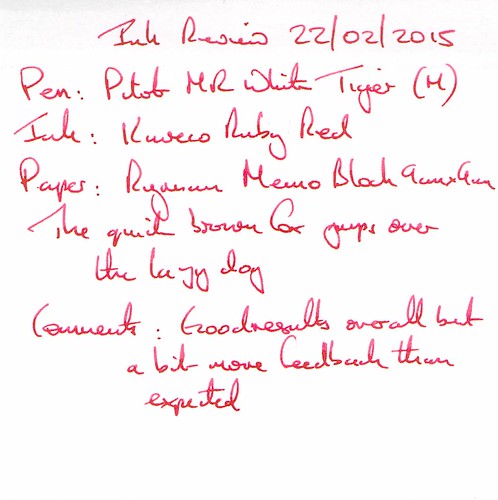 Fine on this paper, although there was more feedback than expected – not enough to be a problem. 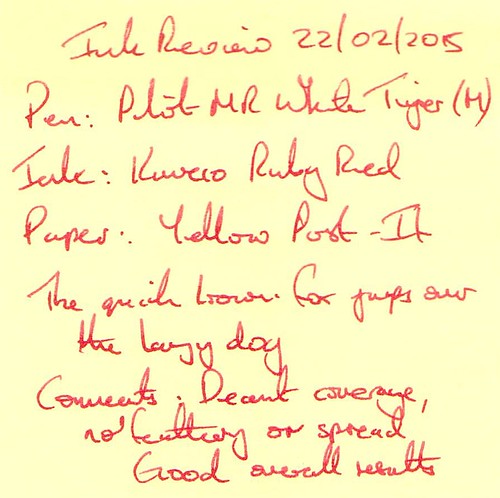 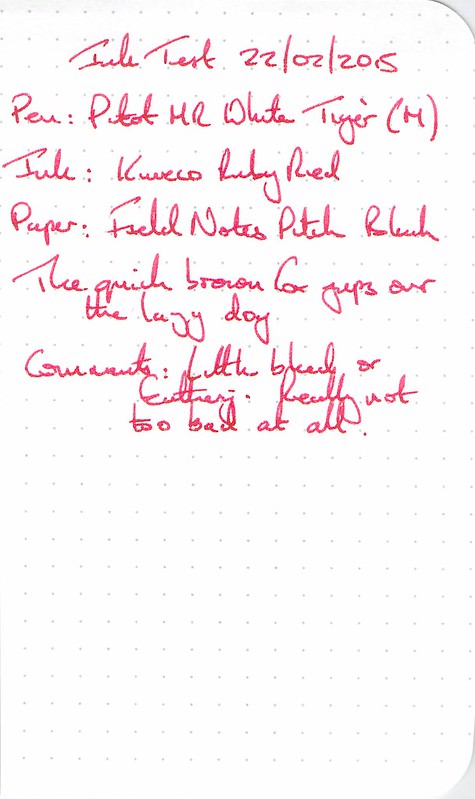 Okay performance on the “great leveler”. 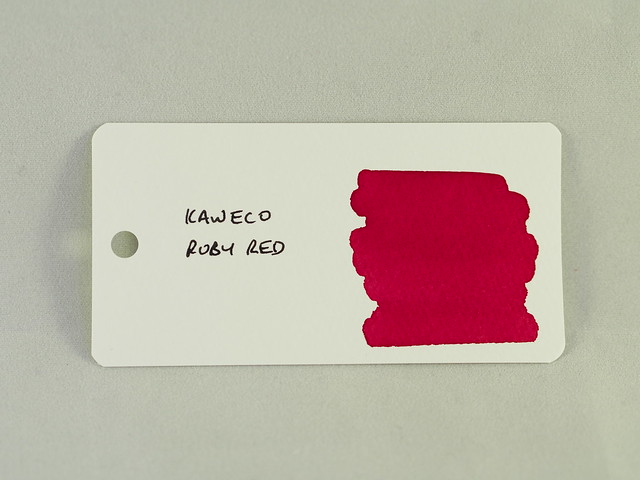 This shows the lean towards pink. 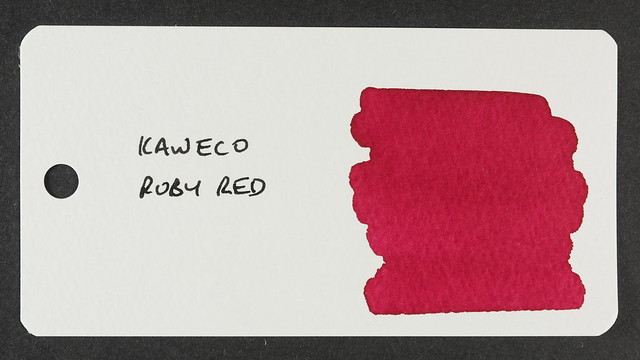 When I first bought the ink I probably let the high price I had paid for it overshadow the fact that it is a good performing ink with a bold but attractive colour. Once again (and this may become a constant theme with the Kaweco inks) if you want a red ink suitable for markup (less so as a note taker) and are happy to pay the premium price for it, you will be rewarded with good performance. It may be a while before I get to break into the second bottle, but it won’t be out of dislike. 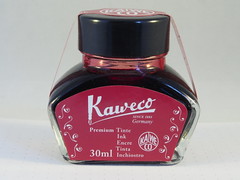 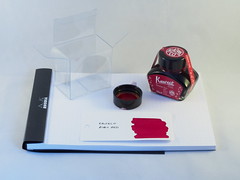 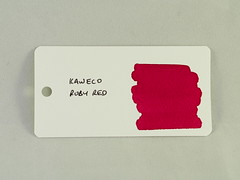