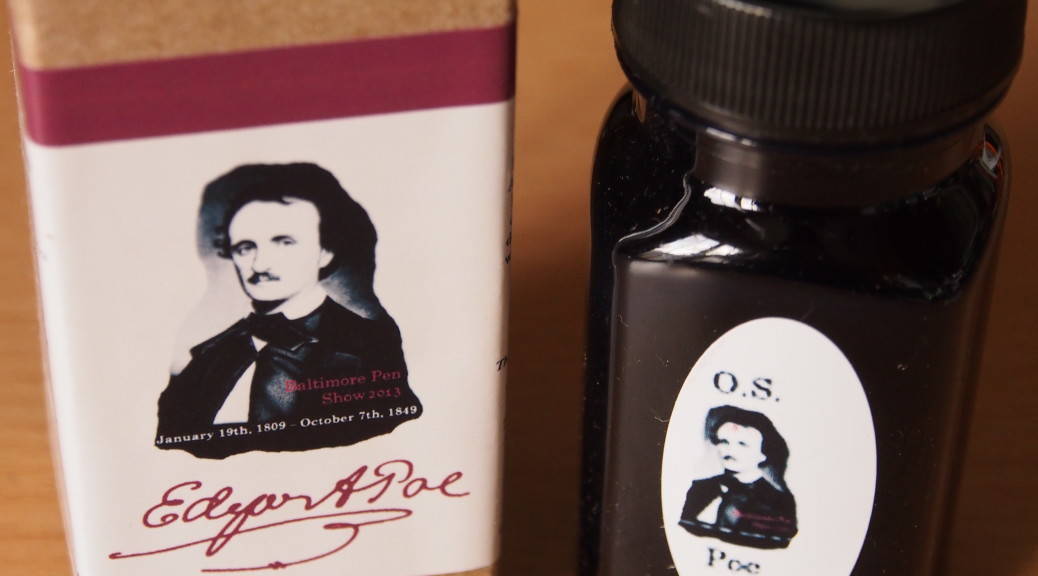 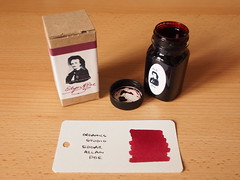 The final review in this set does have some backstory. This Organics Studio ink is named after Edgar Allan Poe, the American author “well known for his contributions to science fiction, mystery, and macabre” (according to the label of the box). It’s often difficult to determine why particular inks are named after notable people, but in this case it’s easy – if you wanted to write a gothic poem or novel in long hand, then why not use an ink that is best described as looking like dried blood?

This was the first Organics Studio ink I ordered – and I must confess it was based purely on the name and colour combination – I am that shallow. I couldn’t find a supplier in the UK (although there is a supplier for the Elements series). Although the ink itself was cheap from the US, the shipping costs pushed the total cost almost into the “expensive” category.

The box is functional brown cardboard, with a label that (for a charge) is more elaborate than the label on the bottle). The bottle is plastic (unusual for inks in my experience), but reminiscent of the Noodler’s 3oz bottles (albeit smaller). The neck of the bottle is adequate (difficult to see how is could be larger, given the size of the bottle. All the packaging reflects the modest price of the ink, and I have no problem with this.

The test pen in this case was a Pilot MR White Tiger, which I decided to try with this ink as soon as it arrived. It’s a strange combination, and wasn’t originally intended to serve as full blown ink test, so the ink stayed in the pen for much longer than normal for one of my ink reviews – and I regularly found myself picking up the pen to take notes.

The ink has little water resistance (leaving a little staining on the paper) and text was easily obscured by a few drops of water. This is a paradox, because the ink proved to be one of the most difficult I have ever tried to clean out of a pen. Water alone would not remove it from the MR feed (neither would diluted ammonia). It only finally succumbed (after copious washing to clear the ammonia) to the pen flush formula by Stephen Brown. No more staining on a kitchen towel after that. 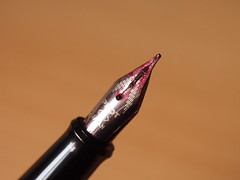 Another feature of this ink is that its after a few days in the pen, what I can only describe as a “crusty gunk” started to appear on the nib either side of the slit and around the edges of the feed. Flow was not affected at first, but it was eventually and I had to push a few drops of ink through the pen, after which flow was restored.

Drying time was around 50 seconds, which if anything seemed a little short compared to the tendency to smudge on Rhodia. However I ran the test again and got the same result.

All of the writing tests exaggerate a red wine tinge, which is present but not so pronounced in reality. If anything the rusty brown notes are less pronounced in the scans. 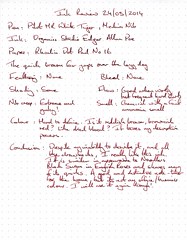 The ink writes well (when flow is not compromised) and I really like the colour, but the handwriting sample shows my mixed feelings about the ink. I’m not sure why I was so equivocal about it looking like dried blood – of course it does. Whether is is really brownish (rusty?) red (or reddish brown) is still up for debate, although there is a strong hint of red wine. Some smudging was apparent.

After getting to the Field Notes paper I realised the ink was actually running out, so I refilled the pen and re-ran some of the writing tests, bit flow on this a paper was not so good.

After refilling performance was okay, although the ink smudged easily, so I’m still surprised by the drying time.

This is the test where I realised something was off – and refilled the pen. The contrast at the bottom of the page is clear (along with the extra feathering) – you’ll have to take my word for the increased bleed.

The red wine tinge is less pronounced than in the writing samples.

This ink is a real mixed bag. The gunk and poor flow would be enough to put me off, and if it wasn’t for the colour I wouldn’t use it again. I will give it another try though, but only in a pen that is as easy to clean as the Pilot MR. When I do I’ll post any updates as comments.