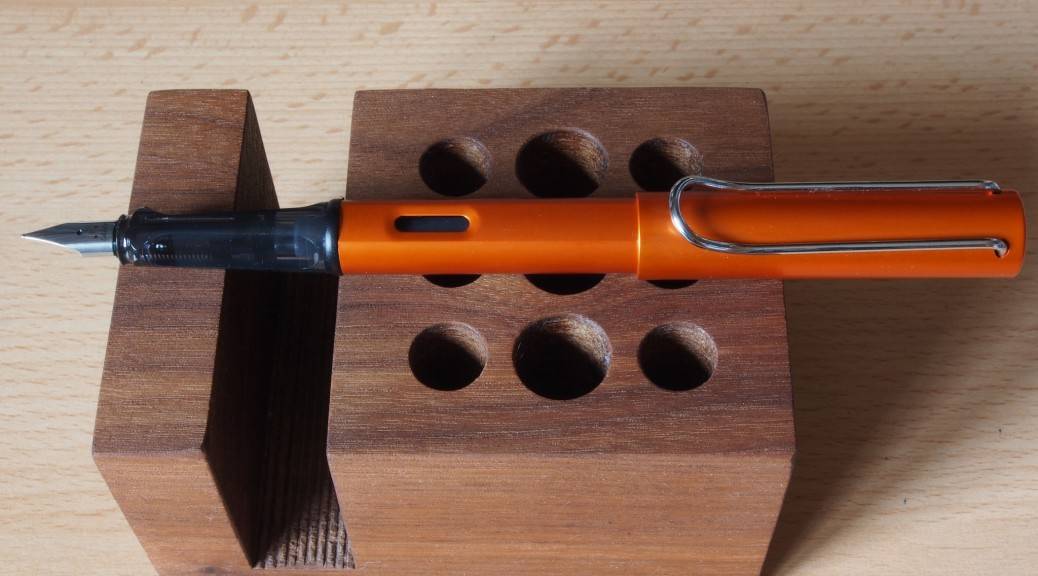 This is a short first impressions review of the Lamy Al-star copperorange fountain pen, which is a special edition released in 2015.

As this is intended to be a short review, I won’t dwell too much on my mixed feelings about certain Lamy pens. However, when I first decided to reacquaint myself with fountain pens in 2012, my first choice was a Lamy Safari, which is identical in design to the Lamy Al-star (albeit with a plastic body rather than aluminium). Even though I bought three at that time (black, blue and red – to complete my favourite trio) I never really took to them. I felt the design gave few concessions to aesthetics, and I went for medium nibs with all three pens – my awareness of fountain pens at that time was so limited that it never crossed my mind to try a finer nib – that came later. So the Lamy Safaris when into storage and my interest in fountain pens laid dormant for almost another year until I became aware of the Penaddict Podcast – which is a story I return to another time.

I revisited the Safaris when I became aware of the other nib options and they have occasionally found their way into my rotation more recently. They still aren’t my favourites pens though. The Lamy AL-star black purple also caught my attention so picked one of those too in the intervening period. The lovely finish took the coarse edge off the spartan design, so that one stayed in my rotation more frequently. When I first saw the Lamy Al-star copperorange, I thought the time was right to dips my toe in yet again.

This pen was tested with a Lamy Orange ink cartridge, also released this year. The pen came with a blue Lamy cartridge, but to have used that would have seemed highly inappropriate. Of course with the proprietary cartridge converter (available separately) any bottled ink could have been used.

So, what are my first thoughts about this pen?

Overall, despite my chequered history with Safari/Al-star range of pens in general, I am pleased with this one and it won’t be flushed immediately. Instead it will stay in rotation for a while.

What about the ink? Again this is not meant to be an in depth review, but it flowed well and gave a generally good writing experience with only the occasional skip. The colour is an attractive orange leaning slightly towards apricot once dry. There’s some nice shading too. Drying time was not measured accurately but didn’t seem unusually fast or slow. I’ve seen some comments that Lamy may release this ink in bottles – if they do I may well buy one, if it’s made available in the UK, in which case I will review it properly.

A few photos follow, with comments where appropriate. Sorry for the dust, more care will be taken next time. 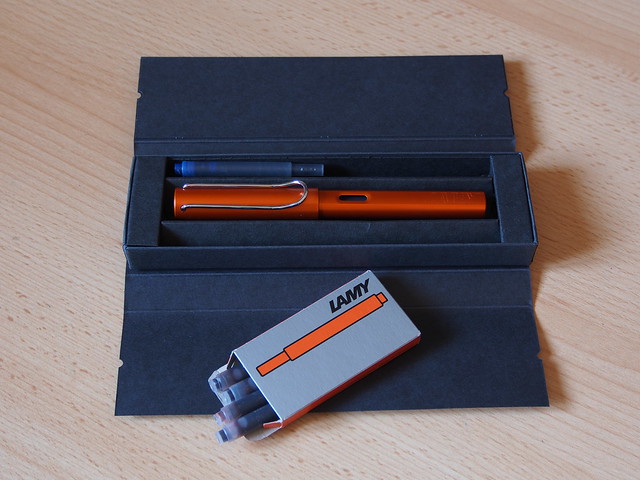 While the nib matches the clip I would prefer it to match the grip. 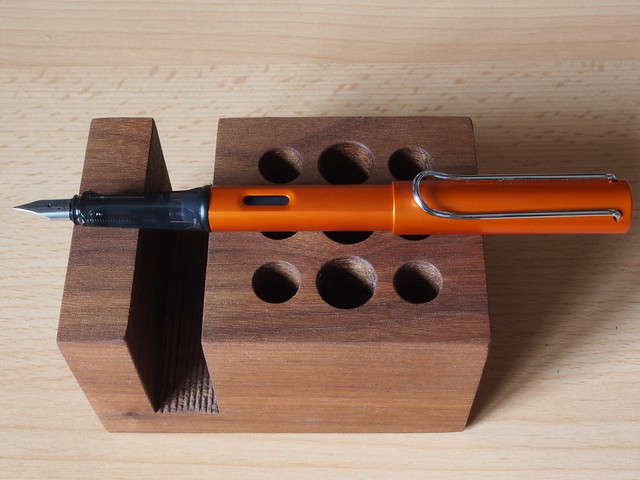 I suppose if the black nibs didn’t exist this would be fine. 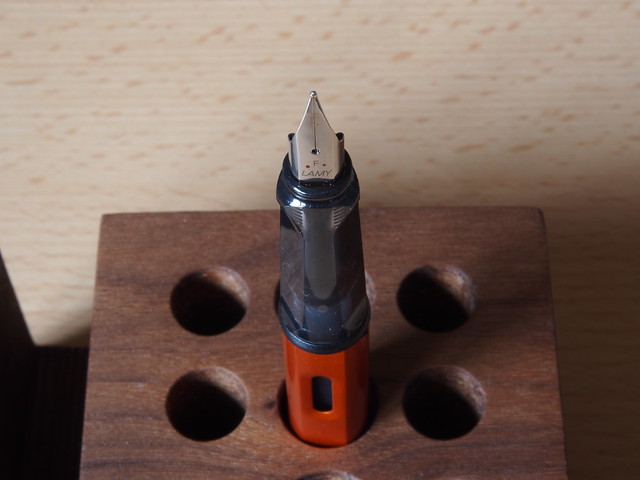 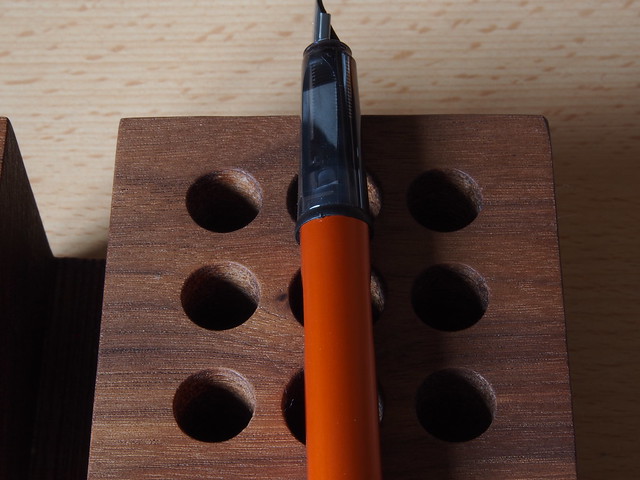 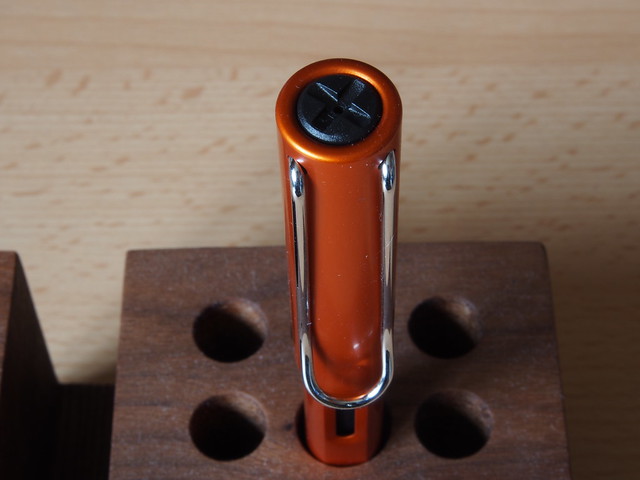 With the replacement nib – that’s much better, despite the mood lighting. 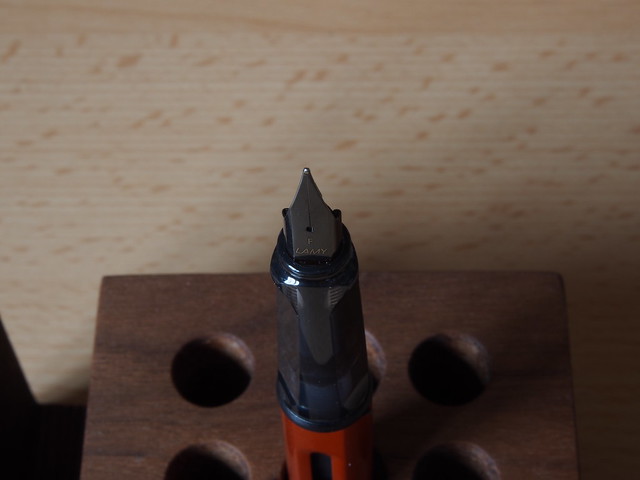 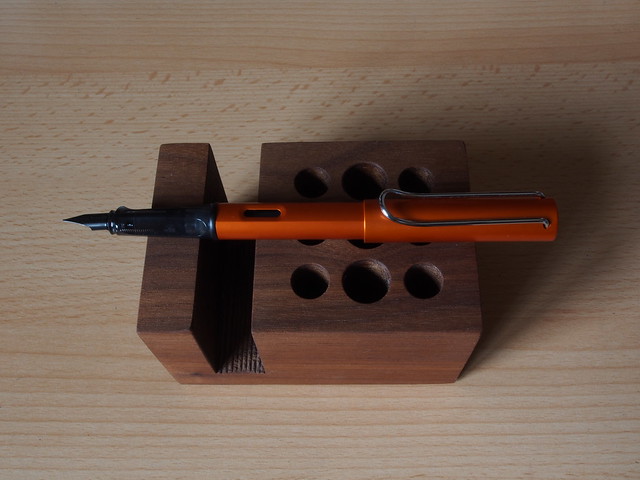 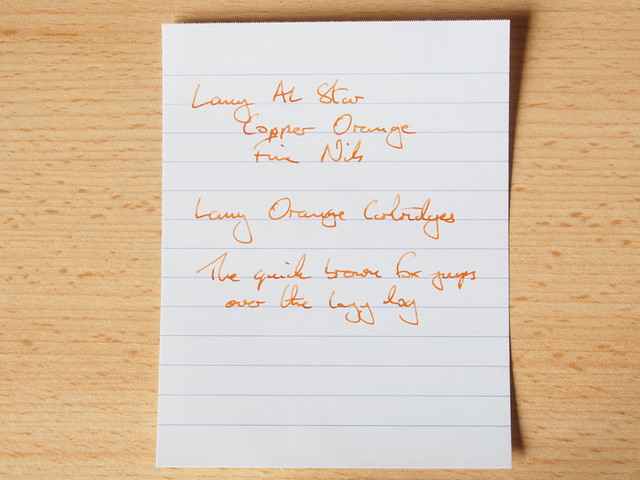 Obligatory Word Card for the ink – with an accidental guest appearance from Noodler’s Kung Te Cheng as the labeling ink (back to Noodler’s Heart of Darkness for “Cartridge”). 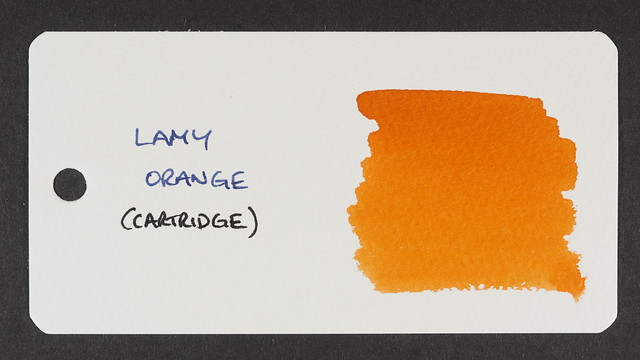