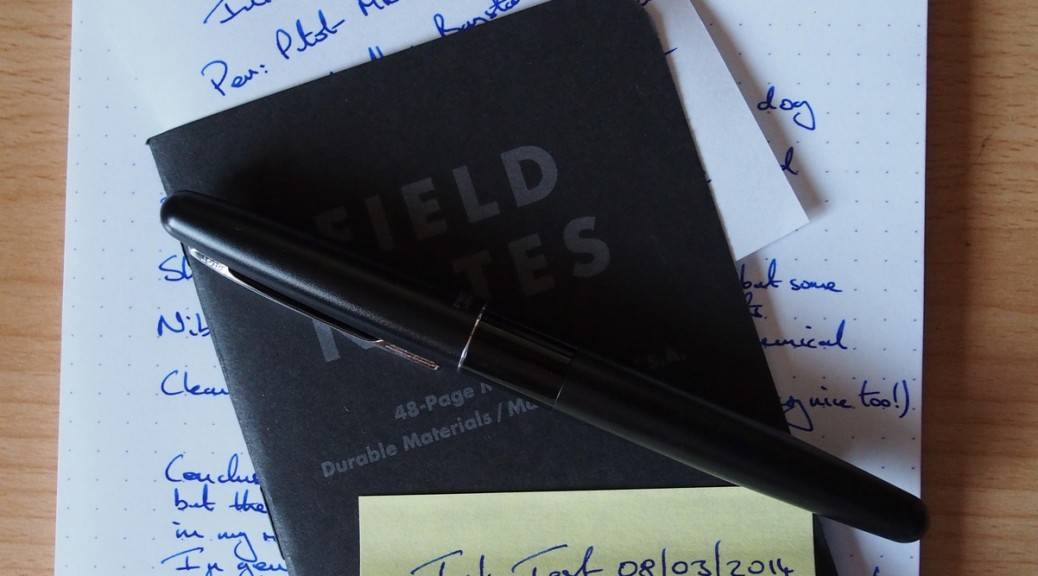 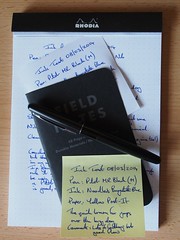 I will shortly be posting my first ink review (at least I will when I’ve sorted out my scanner problems), but rather than pad that out with an explanation of what I like in a fountain pen ink, or the methods to be used in the review and why, I thought I would summarise the key points in a separate post, so here are my ink review basics.

To provide a little background, I take three fountain pens to work each day (with black, blue and red inks). I mostly use the black and blue pens to write notes, and the blue and the red to annotate printed documents. The system isn’t strict and I like having the choice. I keep a fountain pen next to where I sit in my lounge, and use this to take notes and make lists. The ink colour can be anything that I feel like at the time. In my home office I have far too many pens inked up at the moment – so many that I’m to embarrassed to give a number. Suffice to say I have all the colours I like to use within easy reach (black, blue, red, orange, green, violet and purple). I like to match pen and ink colours where possible, but some pens (silver, white) don’t lend themselves to that. I don’t currently have a system for weekly or monthly rotations, so I fill up pens as and when I want to.

My ink reviews won’t be highly scientific (there are far better resources for that such as the great FPGeeks Inkcyclopedia), but I will concentrate on my personal writing experience. I will usually use just a Pilot MR which I find to be a good all round pen and the one I pick up most often when I want to take a quick note. I tend the prefer Japanese Medium and European Fine nibs. I may include some other daily use pens from time to time.

The handwriting will be my reasonably legible cursive which has evolved (or devolved) over the years. I won’t attempt to write long passages in capitals (I rarely do that in real life) or fancy calligraphy (not that I could anyway).

For the main reviews I will use a Rhodia Dot Pad No 16. I get through a lot of Rhodia pads so this is typical of the majority of the paper I use. I will also carry out tests with the following:
Ryman 3″x3″ Memo Block sheets – I use these a lot too. The paper isn’t great, but fine for quick throwaway notes
Post-It Notes – Although I favour Memo Blocks now, I still use Post-Its from time to time, I rarely use fountain pens on them as the adhesive makes the surface a challenge and they are prone to feathering. It will be interesting to see how different pens inks behave.
Field Notes – great notebooks (and I usually carry one stashed away) but very few fountain pen inks behave well with them. They are a really good test for feathering. I’ve standardised on the Pitch Black version for testing.
Update 22/03/2014:As suggested by Brad Dowdy I’ve added Mnemosyne Word Cards as well. They may not be perfect, but they are convenient.

The most important factor of all to me for an ink is its colour. This may seem obvious, but it’s true to say I wouldn’t be bothering to use fountain pens if the only ink that was available in the world was Parker Quink Royal Blue Washable. As a general rule I prefer deeply saturated colours. I’m not a great fan of pinks, browns or turquoise. I can’t see any circumstances where I would use a yellow ink. I tend to prefer black inks that put down a dense black line with minimal shading. I will forgive a lot of problems with a particular ink if I like the colour.

Other characteristics I will include in reviews are: